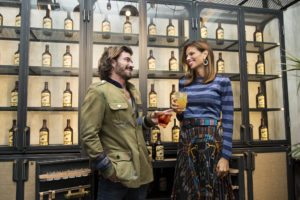 Ron Matusalem surprises us again with two exceptional brand ambassadors. The world of Matusalem Homies is defined by decoration, style and inspiration.

The essence of Cuba, the elegance of a one-of-a-kind piece, a splash of colour, the sound of a record being played... At Matusalem Homies we’re going to discover the style 'Colonial Chic' with our embassadors, Miriam Alía, better known as "the designer of happiness" and Valero Rioja, photographer of national and international celebrities.

There is nobody quite like them to convey the values of Matusalem Homies, a world that inspires wherever it goes, thanks to the legacy of Ron Matusalem. This liquor is an unconditional supporter of design and everything that comes with it; the importance of a job well done, the value of the small details and the constant struggle to reach what we aspire to.

First, we have interior designer Miriam Alía, whose career is an ongoing search for beauty, paying particular attention to the little things that make up a unique composition.

Passionate about antiques, she seeks pieces with a history that makes them shine in harmonious conjunction with modern furniture. Design is the best way for her to convey what she feels, depicting a place without rules whose tropical nature is reflected through prints evoking the fauna and flora of past colonies.

Next is Valero Rioja, today’s most popular celebrity photographer. The most famous national and international faces have posed before his lens. Having studied Fine Arts because of his a talent for drawing, he soon discovered that what he most enjoyed was taking photographs. Meticulous in all aspects of his life, he is first and foremost a lover of vintage furniture stores, where he gets hold of the little treasures that decorate his home.

Through its HOMIES, Ron Matusalem takes us back to the golden years of Cuba, the country where it was born and which forms part of its very essence. It is only those who fight for what they believe in who deserve this liquor, a designer rum which, like its brand ambassadors, shines in all its authenticity.