Madrid, July 2018.- This past year has been crucial for Zamora Company: the Cartagena based company has run a huge acquisition campaign both nationally and internationally, giving it relevant player status in the industry. Companies like Lolea from Aragon, specializing in the production of premium sangria and the Galician orujo El Afilador, have been fully acquired, bringing them into the colourful  portfolio of Zamora Company wines and liqueurs. The acquisition strategy has gone beyond Spanish borders, with the full acquisition of the Italian premium limoncello producer Villa Massa, and that of a majority participation in the UK’s Martin Miller’s Gin. Zamora Company has also recently announced its majority participation in the wine and liqueur distributor Tintafina, based in China, thus reaching its expansion target in what has proven to be a market with great potential for the selling of wines and spirits.

The end of 2017 has shown a turnover of €169 million, a 3.8% increase in relation to the previous year. This positive development is marked primarily by the company’s most iconic brands: Licor 43 and Ramón Bilbao, whose exponential growth have helped enormously in generating the increase in Zamora Company’s revenue.

Specifically, Licor 43—the brand with which the company started out in 1946—has become the 8th highest sold premium liqueur in the world thanks to its continued growth and success in places like Germany and Holland, where it stands at number 1 in sales. Meanwhile, Ramón Bilbao is the leading brand in the hotel and catering industry in the domestic market, with an 8.5% share of Rioja Crianza wines and an annual growth that makes it a role model in the panorama of Spanish viticulture.

A COMPANY WITH MARKED INTERNATIONAL PRESENCE

The internationalization strategy implemented by Zamora Company can be seen in the creation of new markets as well as in the increase of revenue in international markets already established. 80% of the international revenue is grouped among the top 5 destination markets, the most important being Germany, followed by Holland, Mexico, the United States and Belgium.

Furthermore, as part of its internationalization strategy, in 2017 Zamora Company established a number of Joint Ventures abroad, as is the case with the German company Schwarze & Schlichte on the German market, a model that has been replicated in countries like China, Australia and France. The company also hopes to meet its internationalization goals through its growing presence in the Chinese market, thanks to the recent acquisition of a majority participation in the distributor Tintafina, as well as in the United States market, thanks to the recent acquisition of Yellow Rose.

LOOKING AHEAD: A PLAN WITH ABITIOUS SHORT-TERM GOALS 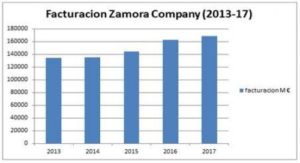 Over the past 6 years, Zamora Company has seen a substantial increase in revenue: the company has gone from €123 million in 2012 to €169 million in 2017, an increase of 37% during this period. This positive trend has been sustained even during difficult years of financial uncertainty for the country. But the target revenue for 2020 is even more ambitious: Zamora Company aims for a 52% growth in revenue in 3 years, which would amount to €256 million: “The acquisitions and strategic partnerships that we have recently set up are the starting point from which Zamora Company is to see a healthy and sustained growth in the short term, both nationally and internationally. At the same time, Zamora Company will uphold its solid and fruitful commercial strategy based on the capillary distribution of its premium brands across all its markets, along with an efficient and innovative marketing plan. All of this has been made possible by our fantastic team, a team who foresee further new incorporations in the short term” adds Restoy.

Zamora Company concluded 2017 with 12 production centres, 8 of which are located in Spain and 4 outside the country. The company, which has seen a 38% increase in employees compared to 2012, brought 2017 to a close with a staff of 372, and predicts the arrival of 425 new employees in 2019.

The internationalization plan and overall strategy devised by Zamora Company will allow 40% of the revenue in 2020 to come from the wine division.