ZAMORA COMPANY TURNOVER RISES IN 2018: 196 MILLION EUROS, AND GROWS 16% VERSUS THE PREVIOUS YEAR

Madrid, June 10th 2019.   2018 was an absolute record year in terms of turnover for Zamora Company which reached 196 million euros, representing a growth of 16% over the previous year 2017, (169 million euros). Both figures are key milestones in the company, confirming its position in the industry and pursuing the growth trend of recent years. 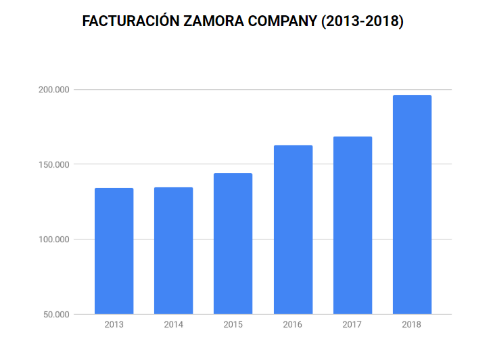 In addition, 2018 was the year in which international sales reached their highest level in the history of Zamora Company; 43.5% of sales during the year were from outside Spain. The data is a clear sign that the internationalization strategy which the family owned Zamora Company based in Cartagena is focused. In in 2013 33.5% of its turnover came from international sales and five years later, these have taken a greater share, with Germany, the Netherlands and Mexico being some of the main markets in which the company operates.

This outstanding and sustained growth over time is the reflection of an ambitious expansion plan that has led Zamora Company to implement a series of strategic movements in the international arena. Thus, 2018 was the year in which the company opened its own structures in the United States and China, reached an agreement with the distributor Tintafina (with an eye on the Asian market) and acquired 55% of Martin Miller's Gin among other notable operations.

2019 follows this trend, with the opening of its offices in Mexico and France as well as the entry into new business models, such as Casa Lolea restaurants in Spain and the United States.

"The figures for 2018 are the proof that we have been doing things well, with a large workload behind us. However, we must be cautious about what comes next. We have made a great effort and now we want to consolidate our strategy and our brands in these new markets; to establish the pillars of what Zamora Company will be in the medium and long term, "says Emilio Restoy, CEO of Zamora Company.

2018, A YEAR TO CONSOLIDATE THE BASES OF THE FUTURE

Licor 43 and Ramón Bilbao continue to be the brands with the greatest weight in the group’s turnover globally, although all the company's brands grew both in terms of turnover and sales volume. All have contributed to the spectacular development of Zamora Company. The company estimates to close 2019 with a turnover of 215 million euros.

The group also  highlights that that its size has also increased in terms of people. As a result of new acquisitions and the entry into new markets between direct and indirect positions, Zamora Company closed 2018 with a workforce of 424, well above the 324 of 2017. It is expected that by 2019 that figure will rise to 450.

With this growth, Zamora Company intends to pursue the consolidation of its long-term strategy investing in growth in international markets, continuing to support brand building initiatives and ensuring that innovation and interaction with consumers play a big part.

Zamora Company's strategic plan expects that 10% of its turnover will come from new products that did not exist in the company's portfolio in 2016 by the end of 2020 .