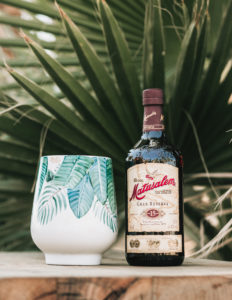 Matusalem Rum, world-renowned for its quality and air of nobility, is an unbeatable way to greet the summer. And there is nothing more inspiring than its place of origin: Cuba, a country where time stands still and the feel of the old Spanish colonies remains. A place full of history that captivates its visitors with its lighthearted pace and unique lifestyle, which, like the rum itself, leaves a impression on anyone who experiences it.

On this occasion, Matusalem Rum was put in the hands of Andrea Zarraluqui, reminding us once again that it is a designer liquor. One of this country’s most influential artists, Andrea is known for her hand-painted dishes which she endows with unique colour and precision. Porcelain is her canvas of choice. Nonetheless, the technique used is highly complex, given that it holds certain similartities to that of watercolour: light and dark, honouring white spaces and avoiding excessive colour-mixing.

This Matusalem Rum Limited Edition by A.Z. shows the essence of this super-premium liquor which takes us back to Cuba’s golden years. The painter perfectly captures the flora and fauna of the island through light strokes and tropical tones. The banana and palm leaves intertwine in rhythmic play, giving way to tiny swallows; the most common species in La Habana, known for their beauty and elegance in flight. This free-spirited bird, spontaneous and of admirable personal character provides us with the indisputable emblem of this rum. From the time of its creation in 1872, these birds nested in Matusalem warehouses, coming and going as they pleased, which inspired the founders to include them in the brand’s logo from the very start.

THE WORLD OF ANDREA

Andrea Zarraluqui was born in London, but all her childhood memories go back to Jerez de la Frontera. She lived there until she was 13, when she moved back to the UK to study, and began to cultivate her love for art. Since then, Andrea has never put the paintbrush down, and gradually she has turned her hobby into a full-time profession, eventually making her this country’s most valued porcelain painter.

The artist, who currently lives in Madrid, personalises dishes by hand with impeccable precision, for brands as well as for individual clients. All of her work expresses solid enthusiasm, and every detail reveals that her passion for painting has immersed her in a world where nature and wildlife are always in the spotlight.

The Matusalem Limited Edition by A.Z. is available to order via @azarraluqui with an RRP of €85.