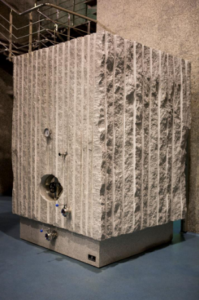 After several years of research and work in the field of winemaking and viticulture, Mar de Frades winery (Pontevedra) is once again committed to innovation in the D.O. Rías Baixas, incorporating a new granite deposit in its winery, with the objective of experimenting and developing new creations with a very high oenological profile.

This project, born in 2015, will be led by winemaker Paula Fandiño, who after her effort and concern to work with new materials began with the creation of this new deposit that will allow "to elaborate wines of a different profile than what we have been doing until now . We want to see how the Albariño grape behaves in ancestral and native materials".

The specific properties of granite, such as its crystalline texture, low permeability and thermal stability, among others, will cause a great variation in the porosity, the exchange of oxygen and the very dynamics of the fermentation of the grape.

Mar de frades, continues its winemaking project called Petra Nai, "Mother Stone in Galician", thanks to the use of this rock in the creation of the new deposit with which Zamora Company has been working for around 4 years.

It is early to know the first wine that will go on the market using this new technique, as Paula Fandiño confirms "although we will start working with the wines of the 2018 vintage, it is not planned to launch any new project until at least 2020. It is a very demanding project in which we do not want to be in a hurry ". Also, the launch of this novel line will consist of a reduced production, where the Salen Valley Albariño will show its usual expressiveness, but with a more complex, elegant and refined profile.