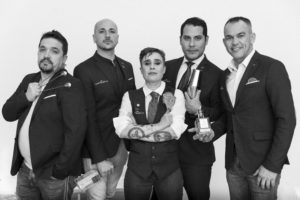 The cocktail industry continues to be on the rise in Spain. There are more and more huge talents showing their skills behind the bar, and ever increasing numbers of people enjoying the experience with them. That is why, Martin Miller’s Gin, one of the most prized gins which—following its elaboration in England, embarks upon a three-thousand-mile journey to Iceland to be mixed with the purest water from the Arctic—has spent three years making the case for mixology with a unique initiative: The Alchemist Club.

These five ambassadors are in charge of promoting The Martin Miller’s Gin Alchemist Club as they shake their mixers, producing extraordinary creations around Spain’s most important cities and wowing others and the public in general with their floods of expertise.

Today, this club has a great many members belonging to the sector, and continues to surprise with projects devoted to all the professionals this document is aimed at.

‘THE BIG ENCOUNTER’ BY THE ALCHEMIST CLUB

Martin Miller’s Gin, which celebrates its 20th anniversary this year, does not cease in its efforts to improve and achieve excellence. In the process, it does not only strive towards its own excellence but also that of the sector.

This ‘Big Encounter’ boasted the attendance of more than 40 bartenders from different parts of Spain, called on by the five ambassadors to share in a day of training and fun surrounding this super premium gin.

Each of the following workshops were taught by professionals from different sectors with new and refreshing content of interest to the bartender community.

This workshop aims to cover the need shared by the bartender community to capture images of their creations, giving them the necessary tools and techniques from the world of photography, with a view to producing attractive, high-quality images when taking photos of their cocktails and sharing them on social networks.

This community makes frequent use of mobile phones in their daily life, so the course is designed with a view to make the most of the cameras on these devices, using apps that maximise the creativity of their photos, with lighting techniques that can give the images much more life, obtaining a more professional outcome.

This workshop centres on giving the bartenders the techniques and tools necessary to work with the public, with the goal of teaching these professionals how to present their cocktails, showing them different situations that might arise in their working environment and how to handle them, as well as how to show off their creations with confidence in cocktail competitions.

The aim of this workshop is to adapt the techniques of haute cuisine to the personal characteristics of Martin Miller’s Gin, integrating the botanicals used in its elaboration and their sensory properties to these culinary methods, allowing bartenders to use them in their creations with the brand.

New cocktail trends are increasingly inclined towards using haute cuising techniques to give the cocktails a more singular and personalised quality.

The bartenders are taught a number of different processes from this field which can later be applied to their cocktails containing Martin Miller’s Gin.

A journey towards excellence

The Martin Miller’s Gin Alchemist Cub brought the best bartenders of Spain’s capital together for the first time in an open round-table debate. They were all invited to give their opinion concerning the evolution of the cocktail industry.

‘The key to a good gin is quality, personality and a competitive price.’

In Spain, there is more and more interest in bartending and the public is beginning to value the work of these professionals, whose key to success is to know the objectives of each bar inside out, and always remain true to their own personal style, while it is also important to get recognised.

The bartender of the 21st century has evolved via social networks, where they can show off their creations, interaction with clients to help them choose, and a very prononced spirit of service in which they pay maximum attention to detail at each step of the creation process. Every choice has a story behind it.

‘The future: it’s best to create it’. This conclusion reflects a passion for overcoming and the importance of recreating oneself.

What served to connect the important names of bartending last year at a number of haute cocktail meet-ups across several cities will continue as of June, with a view to continue transmitting the values of this gin and presenting new super premium creations.

Edir Malpartida, the latest big recruit. Hailing from Peru, he is one of Bareclona’s bartenders of reference.  Among his credentials, he has been a finalist in international competitions. He forms part of the Dr. Stravinsky team (Barcelona), one of the bars which, in its short existence, has placed itself at number 90 among the World’s 50 Best Bars 2018. He was head bartender at the Dry Martini by Javier de las Muelas in Barcelona, and Edir Malpartida also plays an important role in the development of cocktail industry itself, standing as an exemplar for the training of future bartenders. He was also bar manager at Ginkgo Sky Bar.

Rocío Sánchez, barmaid at Varsovia Cocktail Bar (Gijón- Asturias), a benchmark for its cocktails in Spain. She has earned respect and credibility among her peers and is one of the most active and innovative bartenders in the country. Having participated in numerous competitions, she is convinced that being connected with peers and sharing experiences is the best source of inspiration and growth.

Carlos Moreno, “head bartender” at Habanera (Larrumba group, Madrid). Previously, he was owner of Charlie’s Bar and has been head of mixology at DiverXo alongside David Muñoz. Winner of several cocktail competitions, he has a long professional career to show for himself. He is respected and well-known for his creativity.

Ivan Talens, owner of Cocktail & Clam Bar (Valencia) since 2012. He has a long career behind him, throughout which he has won numerous competitions. He set up his own company, ‘Masquebarmans’, specialised in cocktail catering services. After having worked in different cities across Spain and several Michelin-star-holding restaurants, he is currently chief of the Association of Bartenders of Valencia and Murica (ABCV).

Antonio Garrido, head bartender at the well-known bar El Pimpi, Málaga. Recently, Antonio has expanded and created a special cocktail area called La Sole del Pimpi. He is also founder of Cocktail Concept 359, the most modern and dynamic cocktail school in the region of Andalusia, which runs training courses, events and competitions. This year they have been in charge of the FIBAR training workshops in Valladolid. During his career, he has worked in cities worldwide including Berlin, London and Lisbon.