WELL-KNOWN FACES INCLUDING CECILIA SUÁREZ, NIEVES ÁLVAREZ, ROSSY DE PALMA and LORENZO SERAFINI GOT TOGETHER TO CELEBRATE AND AWARD ACTITUD 43 IN A NIGHT TO REMEMBER 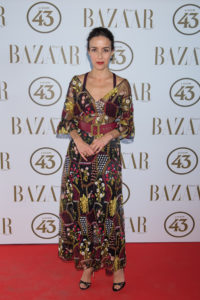 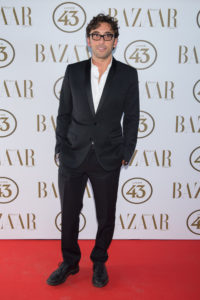 Licor 43 and Harper’s Bazaar gave prizes to personalities from a number of disciplines at the second edition of the Harper’s Bazaar Actitud 43 Awards, people whose careers and attitudes towards life are quite an example. The unforgettable evening brought a number of nationally and internationally well-known faces together, the likes of Cecilia Suárez, Nieves Álvarez, Antonio Navas, Carme Ruscalleda, Fernando Aramburu, Lorenzo Serafini, Miriam González Durántez and Marta de la Rica.

What’s more, actress Nerea Barros was there to hand out one of the prizes, her character and spontaneity making her undoubtedly the greatest brand ambassador for Actitud 43.

Olga Prieto, designer and jewellery maker from Madrid based in Mexico, where she discovered a fasinating world full of colour, energy and light and, most of all, the beauty of local crafts, paid homage to this feeling and way of seeing life with an exclusive sculpture which was presented as an award to the undisputed representatives of Actitud 43 this year.

Licor 43 and Harper’s Bazaar share the same attitude, and so they wanted to give awards to a number of personalities for their effort and dedication yet another year. The second edition of the Harper’s Bazaar Actitud 43 Awards recognises the personal and professional success of inspiring creatives who work ceaselessly until they reach their goals.

It was a night to be enjoyed and to celebrate everything that sets us apart and makes us unique; the kind of lifestyle belonging only to those who dare to be themselves. This is the attitude of people who are confident, business-minded and different: men and women who leave a mark wherever they go and taste every success with Actitud 43.

Finally, there was no better way to celebrate the success than with the popular Ginger 43, which was unquestionably one of the main features of the night, comprised of a subtle blend of Licor 43, Ginger Ale and freshly squeezed lime.

ACTITUD 43 GOURMET AWARD – CARME RUSCALLEDA, who was given the prize by SAMANTHA VALLEJO-NAGÉRA

ACTITUD 43 CREATIVITY AWARD – LORENZO SERAFINI, who was given the prize by model CLARA MÁS

ACTITUD 43 LITERARY AWARD – FERNANDO ARAMBURU, a prize given to him by actress NEREA BARROS.

ACTITUD 43 SOLIDARITY AWARD – MIRIAM CLEGG, who was given the prize in recognition of her career by the minister NADIA CALVIÑO.

ACTITUD 43 MALE STYLE AWARD – ANTONIO NAVAS, who was given the prize by stylist JOSIE.

ACTITUD 43 EXPRESSION AWARD – CECILIA SUÁREZ, who was given the prize by actress CARMEN MAURA.

ACTITUD 43 INSPIRATION AWARD – MARTA DE LA RICA, a prize given to her by the Community of Madrid councillor JAIME DE LOS SANTOS.